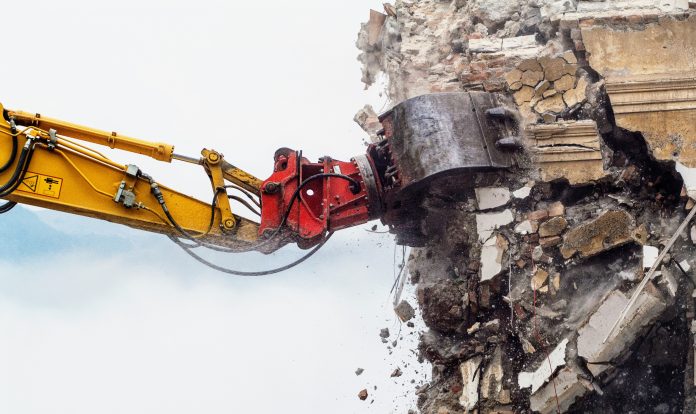 A Builder took extreme action when a customer refused to settle an unpaid invoice. Frustration over an ongoing dispute over an unsettled bill caused a builder to take action into his own hands.

Works were ordered by a house owner in an affluent part of Leicester were the average house price exceeds £540,000. Whilst the home owner has been on holiday, the disgruntled builder decided to ‘undo’ all the work he had done so far.

The resulting mess far exceeds the value of the debt in question. The Homeowner told LeceistershireLive that he and the builder who had been working on the house got into a dispute over monies that were to be paid.

The home now has a missing roof and rubble scattered around it, with neighbours upset about the mess it’s created.

The 40 year old homeowner is reported as saying “I bought the house last year. The builder started in February and we wanted lots of work done so it could become our family home for six of us.

“We wanted a two-storey extension, a new roof, new wiring and for it to be more environmentally-friendly.

“Unfortunately I picked the worst builder.”

The owner continued: “I had gone on holiday and was 200 miles when it all happened on Tuesday. I’ve contacted the police, who said it was a dispute and not a criminal case, and I’ve emailed Trading Standards.

“I’m still on holiday so it’s difficult to sort out from here.”
The homeowner gave no explanation as to why he had not paid the builder other than he was on holiday.
Builders not being paid is nothing new. Guidance from the Federation of Master Builders advises to get everything in writing. This protects both parties in the event of a ‘dispute’.
Although it is not clear why the customer did not pay the unpaid invoice, they are probably wishing they had.
Being self employed and not getting paid is a common occurrence. It is estimated that millions of pounds goes unpaid every year that is owed to UK tradesman.
There has been many instances of Builders and sub contractors taking revenge when not getting paid.
Only last year, a digger driver, John Manley from Liverpool was jailed for causing £443,000 worth of damage to a newly built Travelodge hotel due to his £600 wages not being paid.
The irony was the site was run by Remstone Property Management but Manley was employed by contractor MF Groundworks. Apparently MF Groundworks had already received payment for work carried out on 17 January.
Taking direct action for an outstanding invoice can constitute a criminal offence. No matter how frustrating it is, Tradesman are advised to follow lawful due process to recoup owed monies.
Read more about debt collection in Leicester.