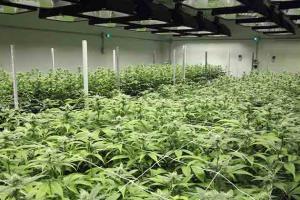 County Court Bailiffs in Sussex called in the police after stumbling across a multi million pound cannabis operation during a building repossession last friday.

The huge cannabis farm was being operated in rented industrial units on the Ghyll Industrial estate in Heathfield, with 2000 plants at various stages of growth.

The visit by the bailiffs followed persistent non payment of commercial rent to the point where the freeholders called in lawyers to arrange a legal repossession of the premises.

Following a court order,  County Bailiffs and locksmiths managed to gain access, only to find a large scale cannabis growing operation. The police were immediately called and the area sealed off.

Thang Cao Do, 41, of no fixed address, was charged with being concerned in the production of a class B drug and remanded in custody to appear at Brighton Magistrates courts.

“I would ask all members of the public to be vigilant, as both commercial and private properties can be used for the production of cannabis.

“Signs to look out for are covered over windows or curtains constantly closed, people visiting properties at odd times, for example to water plants, extractor fans in walls and a sweet, distinctive herbal smell.