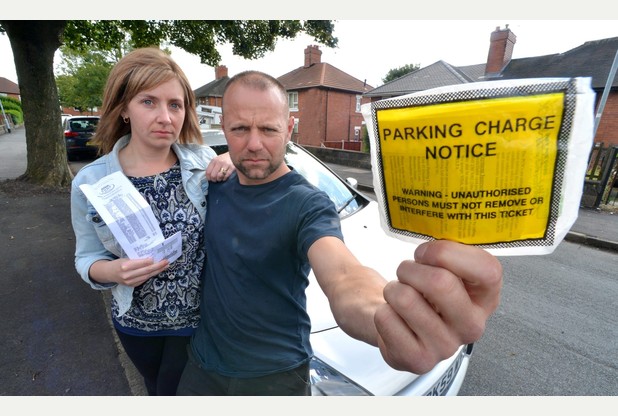 Mother of two Melissa McMaster is furious after her £1 car parking ticket blew off the windscreen and cost her a £70 fine. The 27-year-old had just spent £70 on her weekly shopping at Asda, Tunstall when she returned to the car to find she had been booked.

But despite having proof she had bought the ticket, car park operator Smart Parking has refused to cancel the penalty charge.

The fine comes as national firm UKPC, who also run the Lidl car park in Newcastle, admitted staff had altered time stamps to make it look as though drivers had overstayed.

Melissa, of Stanfield, stated: “I was absolutely furious. The car park is virtually free anyway – you get your £1 back after you’ve done your shop. It was just an accident.”

The incident happened after she pulled up at the supermarket last month with her daughters, nine-year-old Layla and six-year-old Lydia.

As they shut the car the doors, the ticket blew off the dashboard and landed in the footwell.

Melissa was then issued with a £70 fine, which if paid within 14 days would have been reduced to £40.

She added: “I found the ticket on the floor, so I had proof that I had paid.”

She appealed the decision, sending Smart Parking copies of her shopping receipt and original ticket. Melissa’s husband Jason also called on Asda Customer Services to help, and they contacted the parking firm on their behalf.

Husband Jason stressed: “The ticket wasn’t on display, but the important thing was we had bought the ticket.

“The tickets dispensed from the machine aren’t sticky, so I imagine they have a tendency to blow off.”

But now the family have received a letter from Smart Parking, informing them their appeal has failed. It states: “It is the responsibility of the driver of the vehicle to ensure they purchase and display a valid ticket when using this car park.

“As you have failed to display this, and have therefore breached the advertised terms and conditions, we have no option but to uphold the parking charge notice.”

The McMasters can still take their case to the independent appeals service POPLA.

He added: “We have been trying to reduce the expense of parking for ages.

“It’s a bit unfair that people on the Asda car park have to pay anyway, when just across the road, on Alexandra Park, it’s free.

“The managers of the car park for Matalan and Argos in Tunstall have been approached with the intention of making parking free, but they are only come on board if Asda do also.”