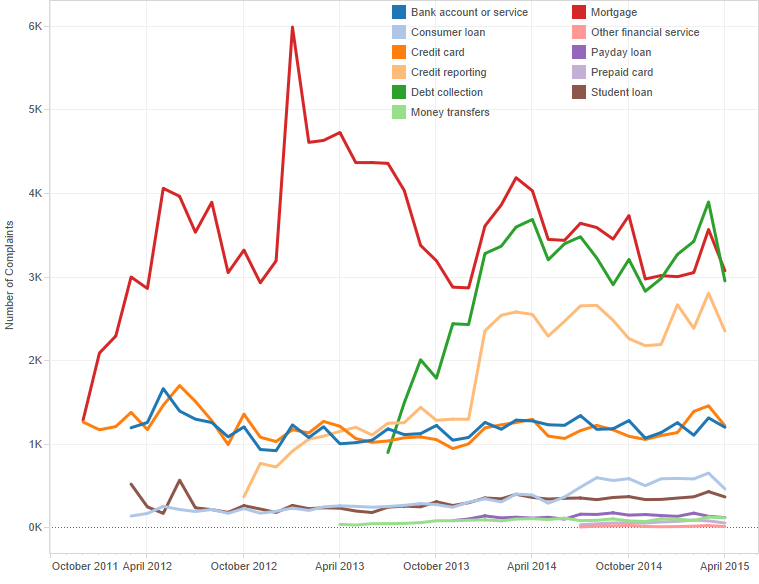 2013 was a big year for mortgage complaints to the Consumer Financial Protection Bureau with there being a total of 49,432 complaints. This staggering figure was nearly as many as all the other products combined. According to the Financial Ombudsman many of the complaints we see involving mortgages have arisen because of a difference between how customers expect their mortgage to work, and how it works in practice. Most people who take out a mortgage have some idea how it operates. However, relatively few mortgage customers have much understanding of the technicalities. Without first asking their lender, for example, many mortgage customers would be unable to say in detail exactly what practical effects a change in their mortgage arrangements would bring about.

Thankfully figures show that the rates are falling with 43,013 in 2014 and mortgage complaints are on track to be lower again at around 35,000 for 2015. This is good news, but there are a number of other categories that are on the rise including debt collection and credit reporting. Complaints within the debt collection industry include consumers that state they are being chased for a debt owed by someone else – because the debt-collecting business has not taken enough care about tracing the right person.

“Debt Collectors come under different guises and it is important to know who your dealing with. Shady debt collectors still operate in certain parts of the UK – using threats, violence and intimidation as their means to collect debts. Not only is this illegal but can put the instructing person at risk of prosecution and retaliation from the debtor. A licensed registered debt collector is the only option if you want to stay the right side of the law”.