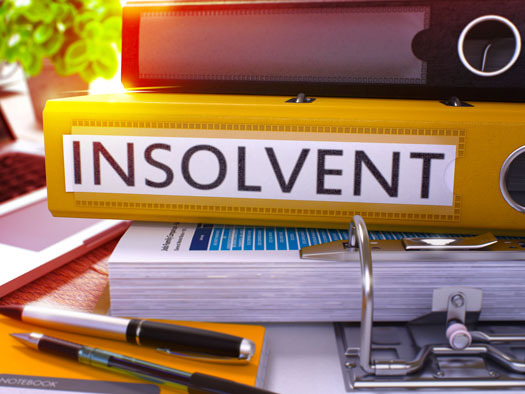 Businesses going bust and company insolvencies are at more than double their 2021 levels for the second consecutive month warns a leading Trade body.

Alarming figures for April published by the Insolvency Service for England and Wales show a 115 per cent rise on April 2021. The figure for March was a staggering 111 per cent up when compared with March 2021.

Uk Trade body ‘R3’, for restructuring and insolvency professionals, said the figures reflected the toll economic turbulence was taking on the business community, even though there was a six per cent monthly fall to 1,991.

Garry Lee, chair of R3’s Southern and Thames Valley region commented “The monthly fall in corporate insolvencies has mainly been driven by a reduction in Creditors’ Voluntary Liquidations (CVLs).

“However, the significant year-on-year rise in corporate insolvencies has been driven by the fact that numbers for the CVL process have more than doubled since April 2021.

“This highlights the role the government’s support initiatives played in preventing the economic damage of the pandemic from translating into an increase in corporate insolvencies at that time.

“It also suggests that large numbers of directors lack confidence in their ability to continue trading in the current climate, and are choosing to close their businesses now rather than being forced to in the future.”

Mr Lee, who is an associate director at accountancy firm Smith & Williamson’s Southampton office, added: “The figures reflect the continued toll the current economic turbulence is taking on the business community.

“The boom many were hoping for when pandemic restrictions ended simply hasn’t happened as the UK has moved from one damaging set of economic stressors to another without any time to draw breath.”

April’s figures also revealed a fall in personal insolvencies, which were down 18.5 per cent on the previous month and 4.7 per cent down year-on-year at 9,409.

But Mr Lee said: “These figures can’t hide the fact that many people’s finances are stretched to breaking point at the moment.

“Our advice to any individuals and business owners or directors in Hampshire and Dorset who are worried about their finances is to seek support from a qualified and regulated advisor, and to do it as soon as possible.

“Having that conversation at an early point is likely to result in a far better outcome than if you’d waited and the problem had spiraled.”

Companies and small businesses are being urged to do all they can to take action to recover monies owed to them.

Chris Spencer from leading B2B Debt Collection Agency Federal Management said urgent action is needed to ensure Businesses stay afloat. “it is imperative Businesses are taking swift action to recover what they are owed. Procrastination does not get invoices paid”

“If invoices are not paid on time then there is usually a good reason why. We speak to many Business Owners every day who stalled on taking pro-active action to recover what their businesses are owed and are now facing not getting paid at all.”